The IEC 62304 requires you to document your Software Architecture. As always, the standard doesn’t provide many details on how you should actually do that. This is good and bad: You can do it however you like, but nobody’s going to tell you how to do it.

Most people then get lost because they have no indication on which level to document things.

Here’s how I would do it. Roughly speaking, at the minimum you should have two things:

Let’s look at some examples. This diagram is taken from the documentation repo of the German Covid Tracking App “Corona-Warn”: 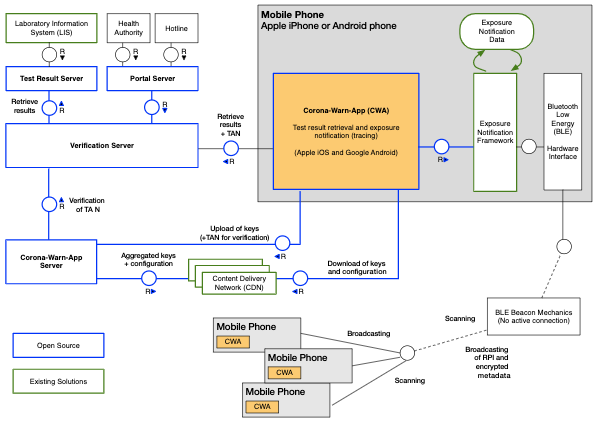 It’s part of a pdf which describes the architecture of the backend. This is only one of many figures - it’s the most high-level one.

It shows which software systems (another 62304 term) exist and how they communicate with each other. There’s the “Corona-Warn App” (yellow box) which runs on a mobile phone (gray box). It communicates with the Verification Server and Corona-Warn-App Server (blue boxes). And then there’s a Content Delivery Network (CDN) somewhere, and of course the app connects to other phones via Bluetooth to do contact tracing. You get the idea.

I’d add a few things to this diagram:

Get the idea? Now, which tool should you use? I suggest draw.io or Lucidchart. But really, this is just about drawing a few boxes. Choose whatever gets the job done for you.

A common question now is: Should you manually update this diagram every time you change your software architecture? Or should you attempt to automate it? Short answer: Draw it manually. Read my answer here.

The second part of your software architecture documentation should be documenting your interfaces. Those could be REST endpoints of your backend (or GraphQL if you’re fancy) or class / instance methods in object-oriented programming languages. I wouldn’t document all of them, only those which are exposed publicly and used by other services.

This is obviously a trade-off between regulatory requirements and usefulness. Should you document all your interfaces and methods instead? It depends.

Having a high-level systems diagram would be quite helpful for them to get an overview. Public interface documentation would also be great if they should communicate with one of your services.

And the good news is: It’s often easy to auto-generate interface documentation (with Swagger UI etc.). So it’s an easy win.

The actual goal of the 62304 seems to be that teams think about a software architecture before writing code. I think that generally makes sense, at least on a high level. Unfortunately, most startups have never worked this way and prefer to write code and come up with architecture thoughts along the way. This leads to things being done in the wrong order: Code gets written first and then architecture gets documented based on that code.

You may get away with this for the first iteration of your product, prior to your first certification. But once you’ve got a certified medical device on the market, you’d rather have processes in place to evaluate changes to the architecture before implementing them.

This applies to high-level systems diagrams. While the 62304 includes interface documentation as part of the software architecture documentation, I wouldn’t go that far. Which developers ever knows the methods they plan to write prior to implementation? It’s useful to have it documented, but I wouldn’t attempt to write it down before you’ve actually written some code. And then it can be auto-generated anyway.

On a slighty different note: You want to get your medical software certified under MDR but don't know where to start? No worries! That's why we built the Wizard. It's a self-guided software which helps you create your documentation yourself, for only 149€ / month. No prior knowledge required. You should check it out.

Or, if you're looking for some human help, did you know that we also provide consulting, often guiding startups from start to finish in their medical device compliance?

And there's so much more: If you're looking for the best QMS software ever, look no further. We've built Formwork, and it's free!

Congratulations! You read this far.

I'm a medical doctor, software engineer and regulatory dude. I've helped 50+ companies with their medical device compliance. I mainly work as a regulatory consultant, but my goal is to make consulting unnecessary by publishing all of our articles and templates for free :)

If you're still lost and have further questions, just send me an email. Read more about me here.

Send me an email
Digital Health Jobs No Cookie For You Privacy Policy Imprint
No QMS on this planet will save you from creating crappy software.